In the midst of this dry California summer, we find ourselves in a short lull between local wild mushroom seasons. It is a fitting time, therefore, to take a look at mushrooms in their dried form. Fresh mushrooms are 80% water, and when you remove that, you are left with a highly concentrated product, packed with flavor and nutrients. Unlike vegetables, which lose much of their nutritional value when processed, dried mushrooms retain all of their medicinal and immune-boosting properties. It is an ideal preservation method, because as long as they are kept away from moisture and pests, dried mushrooms will last for years, if not indefinitely.

At Far West Fungi, all of our mushrooms are dried in-house. We spread fresh mushrooms on mesh racks, and roll them into our drying room, which is basically the total opposite of a refrigerator! Warm air circulates around the racks in convection currents -- not hot enough to cook the mushrooms, but warm enough to quickly and completely evaporate their moisture.

It takes roughly one pound of fresh mushrooms to make one ounce of dried. This creates a potent concentration of monosodium glutamate, or MSG. There are many antiquated misconceptions about the artificiality of MSG. As most chefs know, it is actually a sodium of amino acid that occurs naturally in many foods, such as tomatoes and cheese (and you guessed it, mushrooms!), and contributes to their satisfying umami flavor. This makes dried mushrooms an essential component of savory, umami-powered dishes like dashi, meat-free burgers, gravies, and duxelles.

When portioning dried mushrooms, consider that as a rule of thumb, they have a 10 to 1 ratio, meaning that every 1 teaspoon of dried mushroom equates to 10 teaspoons of fresh mushrooms, and vice versa. The most basic way to utilize dried mushrooms is by simmering them in water for 15 to 20 minutes. This rehydrates them, while simultaneously creating a highly useful mushroom broth. If making risotto, for example, one might reserve the rehydrated mushrooms, and use the broth as the cooking liquid for the rice, and then return the whole mushrooms to the dish when it is ready to serve. The broth also makes a deeply flavorful backbone for mushroom soups, and can be used as the liquid base to which all the other ingredients are introduced. When making mushroom gravy, the broth can be reduced and thickened, and the mushrooms pureed, so that combined, they make a velvety sauce. 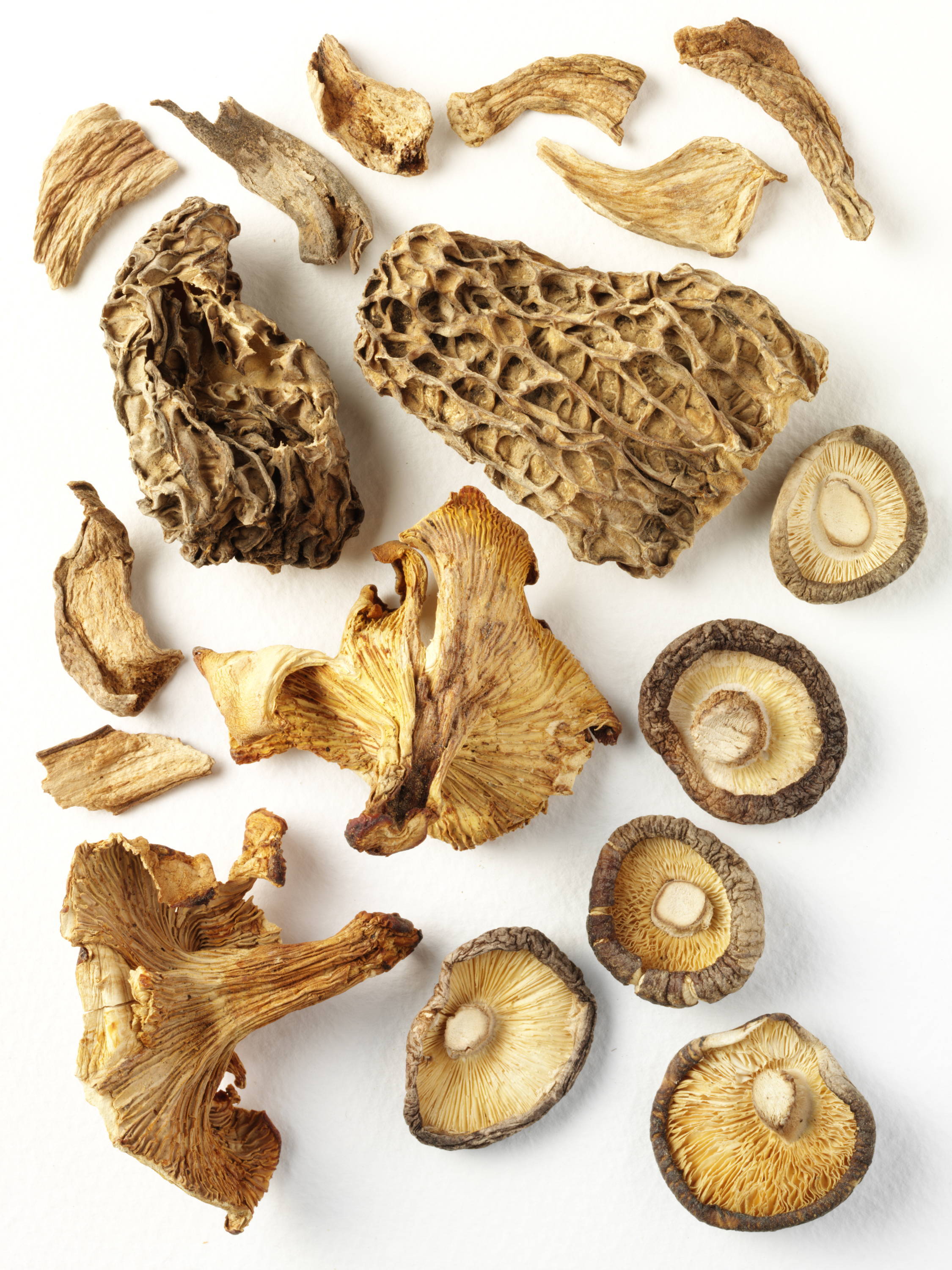 Dried mushrooms tend to be very brittle, so it takes almost no effort to crush them into powder. In this form, they make excellent additions to spice blends, meat rubs, and brines. They can be added to flour for savory baking, or making fresh pasta. Their flavors bind readily to fats, so slowly warming them in butter creates an otherworldly concoction that you’ll want to eat straight out of the pan. In the case of candy caps (which actually only achieve their full potential when dried), rehydrating them in cream or half and half allows their maple flavor to bind to the dairy fats, which can then go into a limitless number of dessert applications. Craft mixologists will often use dried mushrooms (most popularly black trumpet, chanterelle, or porcini) to infuse with alcohol for added complexity in cocktails.

If you have an excess of fresh mushrooms, drying your own at home is easy. Sometimes they will even dry out on their own, if left alone in a paper bag for long enough. Shiitakes in particular can be sundried, and will absorb considerable amounts of Vitamin D. If you don’t have a dehydrator, you can simply spread them out on a tray, and put them in a stove or toaster oven set to the lowest temperature, and leave the oven door half-open. Once you master this technique, you’ll never have to let another mushroom go to waste!