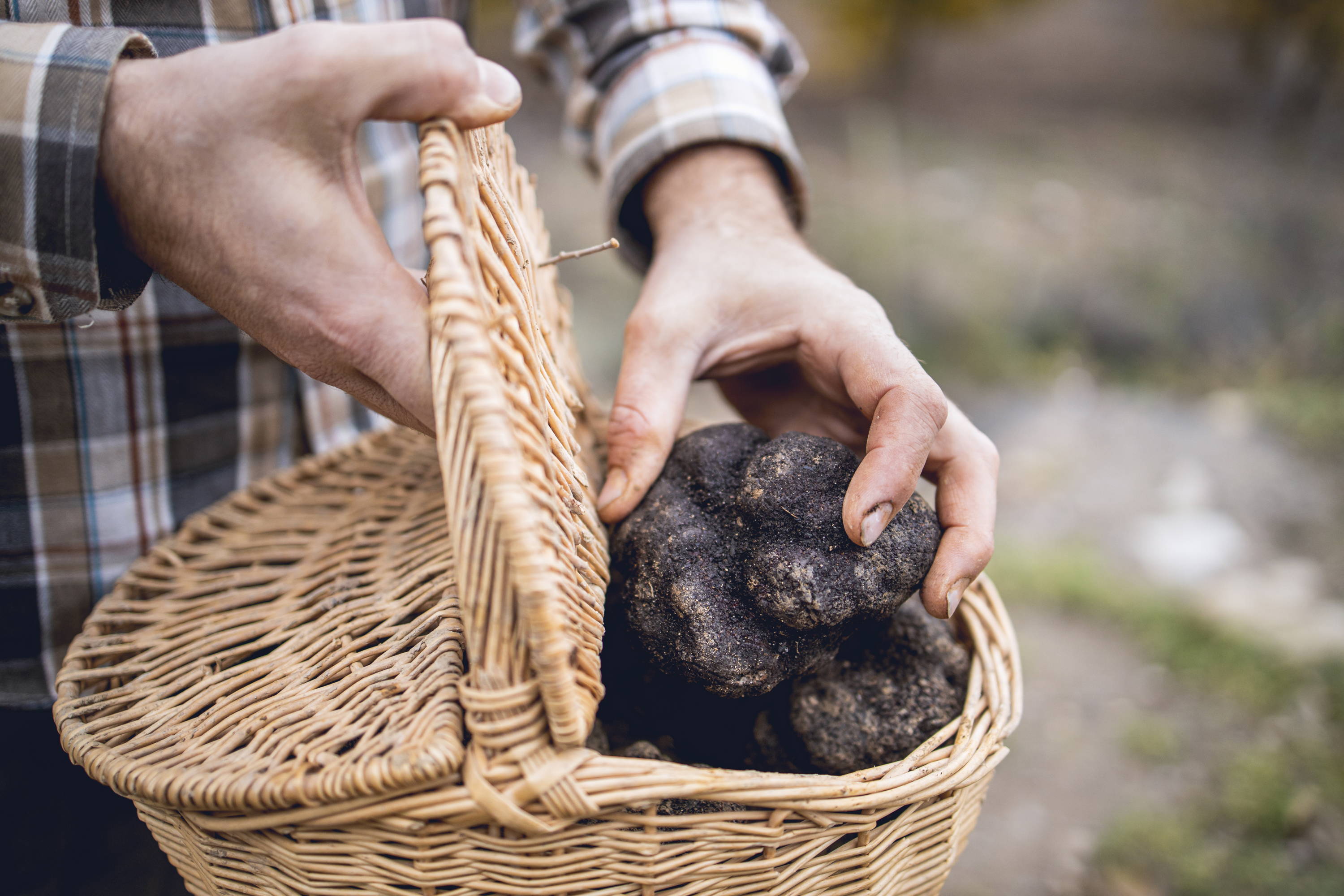 There’s enough information about the clandestine world of truffles to fill a whole book (and many have). These fragrant, elusive, famously expensive pieces of fungus form in the soil underground, typically around the roots of Oak trees. Though they grow all over the world, the most prized varieties come from a select few European countries near the Mediterranean, most famously northern Italy. Because truffles, like wine, can vary in subtle ways based on their terroir, an experienced palate might be able to tell a difference between regions, soil conditions, and even the weather patterns of a particular year.

Truffles have a unique reproductive strategy, which distinguishes them from mushrooms. They are smelly for a reason -- their intense pungency is designed to attract foraging animals, such as wild pigs, which dig around and root through the soil, dispersing the spores and mycelial networks in the process. This is why the classic “truffle pig” is so famous. Early truffle foragers trained pigs to gather their wares for them. There are a number of reasons why this is no longer common practice. Truffle hunters now use a special breed of dog, called a Laggoto Romagnolo, which is a medium-sized, curly-haired dog that looks something like an unkempt poodle. Because the good truffle hunting spots are highly guarded secrets, no one wants to give themselves away by walking a pig through the woods. Also, the pigs, true to their natures, will sometimes eat the truffles, while the dogs are more content to be rewarded with canine treats. 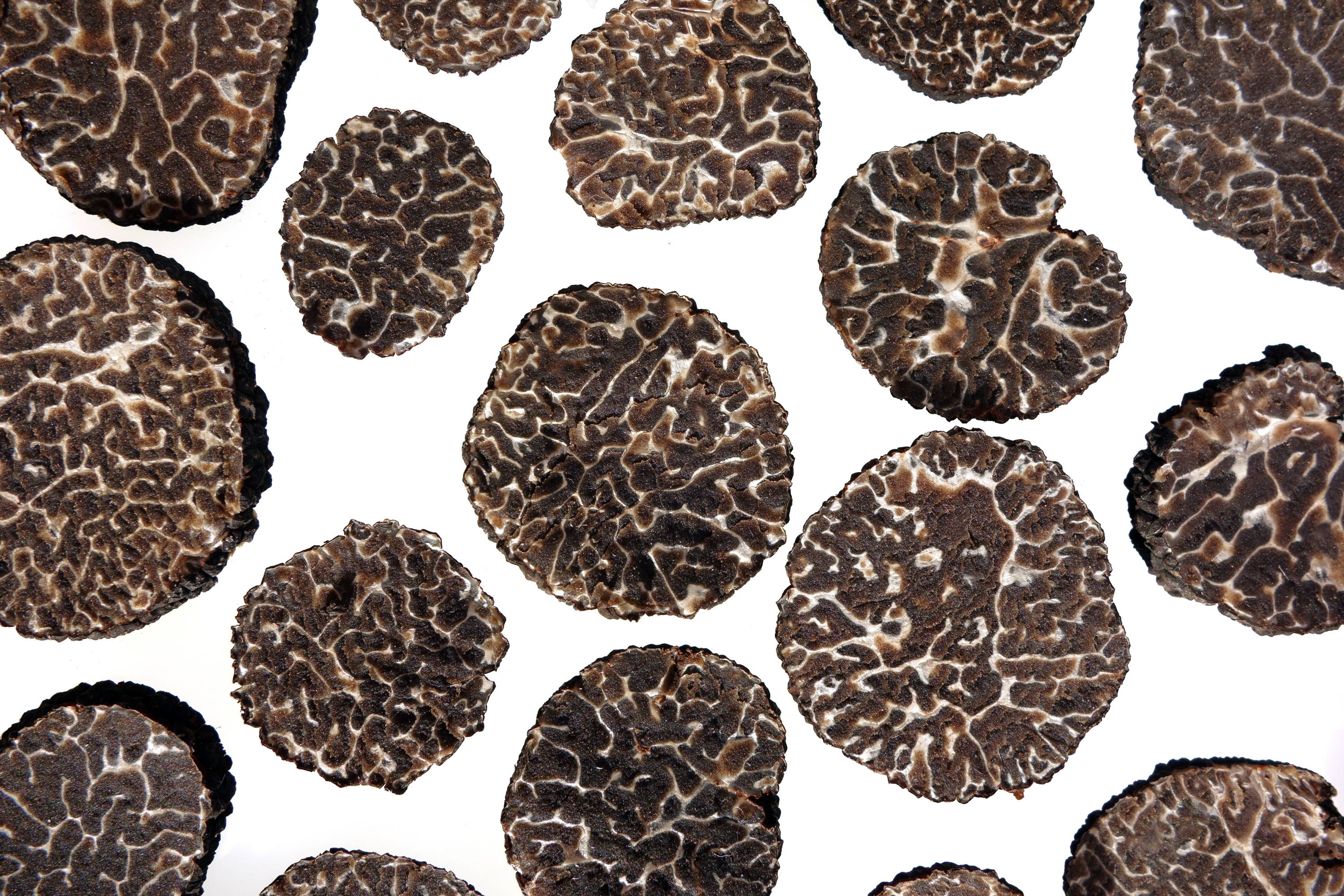 Perhaps the most popular and familiar species to Western cuisine, Tuber melanosporum, Perigord, or Winter Black Truffle, is normally in season between mid October and early February. Most truffle oils and other shelf-stable truffle products are either made from Winter Black truffle, or are made in facsimile of them. This is a good time to address the “there’s no such thing as real truffle oil” rumors. While technically true, there is no fat in a truffle, and therefore you can never squeeze true oil out of them -- however, you will commonly find olive oils infused with very real fresh truffles. Most truffle products are made with both fresh truffles, and a truffle aromatic manufactured in food science laboratories, because the aroma of a fresh truffle is a fragile, fleeting delicacy, and it is nearly impossible to contain and preserve its complex nature for more than a few weeks.

So what exactly is that scent that has launched a thousand ships? In terms of a Winter Black truffle, you could suggest boozy notes of dark fruit, a velvet bitter of cocoa, shot through with butter and the caramel sear on fatty meat, with a faint undercurrent of a sweet rot that you shouldn’t like, but really do. At the same time it is, it also really isn’t like any of those things either. Trying to describe the smell of truffles is like trying to describe the scent of your favorite person. You can’t say that truffles even really smell good. Their aroma exceeds the duality of “good” and “bad” in ways that not even a stinky cheese does; they don’t stink, they intrigue. This is all by the truffle’s own design of course: the chemical constructs of their aroma intentionally mimic pheromones, in an attempt to lure the noses of foragers -- both human and animal -- in hopes that we will unearth them and disperse their spores. They smell like different things to different people, which is why they tend to be so polarizing. People either love them enough to spend many hundreds of dollars on a small piece of smelly fungus, or hate them so much they don’t want to be anywhere near them (however, most people really love them). The first time you smell a truffle, you recognize it instantly, but struggle to put it into words.

You would think that something so unique, nuanced, and mysterious would require a master’s preparation. In fact, the opposite is true. The simplest recipes for truffles are the best. Enjoying one, at heart, should be a rustic experience. Fresh pasta with olive oil and cracked salt, tossed with shavings of truffle so thin they float. A softly scrambled egg with fleur de sel, a thick slice of yellow butter, and fat drifts of truffle shavings. A dry aged ribeye, seasoned with salt and pepper, seared medium rare, and heaped in shavings. Any food topped with truffle should be a simple pedestal, on which the truffle is what really shines. You need nothing but the simplest ingredients, prepared in the simplest ways. Their aromas bond richly to fats, so you must do little but wilt them in the heat of a straightforward dish to unlock all of their powerful mystique.