The fungal kingdom is, as you might expect, filled with some truly bizarre and mind-blowing oddities - and the more you learn, the weirder it gets! Here’s a countdown of our top seven favorite weird mushroom facts. 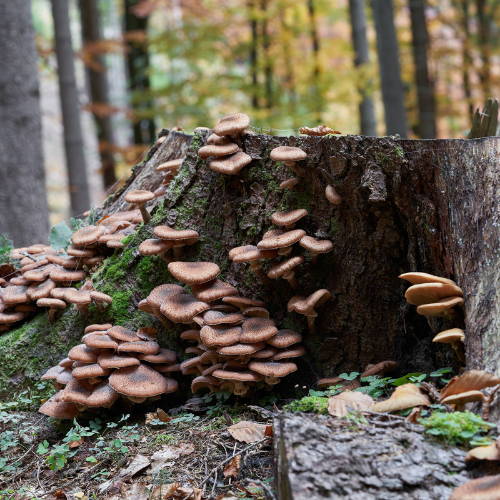 When asked about the largest living creature on earth, most people think of the blue whale, or maybe a Sequoia Redwood, but speaking in square footage, the largest single living thing on the planet is actually a mushroom. Or, a mycelium, rather. It is an Armillaria ostoyae, or Honey Mushroom, and it lives in the soil of Oregon’s Malheur National Forest. This one individual organism spans a whopping FOUR square miles, making the world’s largest blue whale seem miniscule in comparison! In addition to being the largest living organism, it is also thought to be the oldest organism as well, and is estimated to be over 8000 years old! 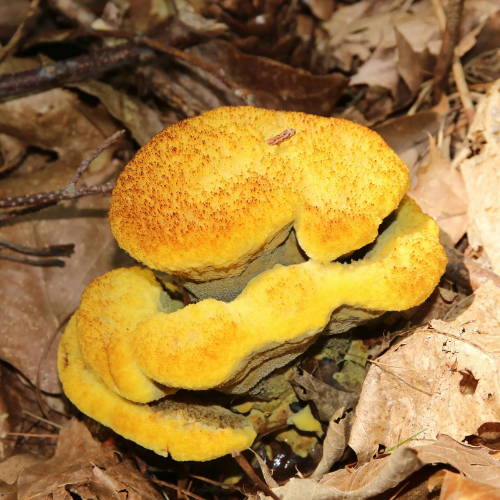 Landscapers hate it for its paralysis of tree roots, but textile artists and natural dyers prize Phaeolus schweinitzii, or the Dyer’s Polypore. Though tough and inedible, this shelf fungus produces beautiful, permanent colors in fabric. Depending on the mordant a dyer uses, this polypore will create colors ranging from rich goldenrod to earthy olive tones. 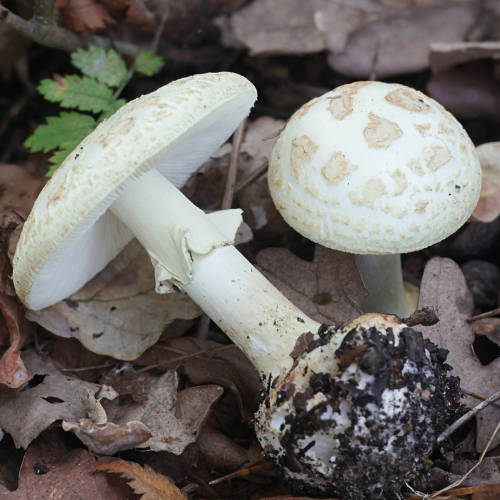 If you couldn’t tell from the name, this mushroom is bad news. Amanita phalloides is the deadliest mushroom there is. It is responsible for the majority of fatal mushroom poisonings worldwide. Sometimes nature likes to warn you of danger with bright colors (see snakes), but not so with the Death Cap. This totally normal looking white mushroom appears harmless, and has many edible look-alikes, however, it causes acute organ failure, destroying the liver and kidneys. Ingesting just half a cap is enough to kill an adult human. The most sinister thing about this mushroom is that the symptoms are often delayed up to 12 hours after ingestion -- by the time the poisoning is realized, it is already too late to reverse the organ damage. 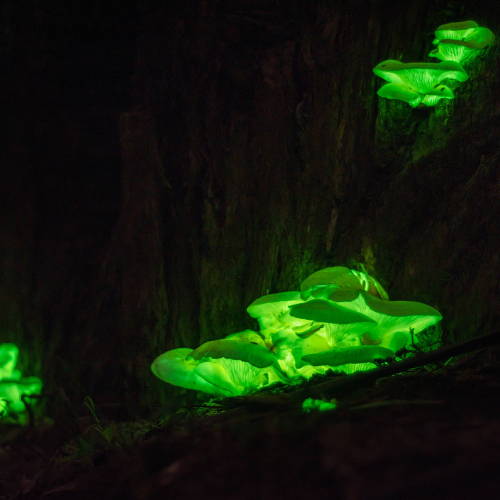 Certain mushrooms glow in the dark! There are at least 12 known varieties of mushroom that create their own eerie green light when the sun goes down. These species contain a compound called oxyluciferin, which emits a spectral glow similar to ones generated by fireflies, and some species of algae. It is theorized that this light is intended to attract insects at night, which then help spread the mushrooms’ spores. Much of the spooky old lore about ghosts and bog lights is now known to be simply mushrooms glowing in the dark. 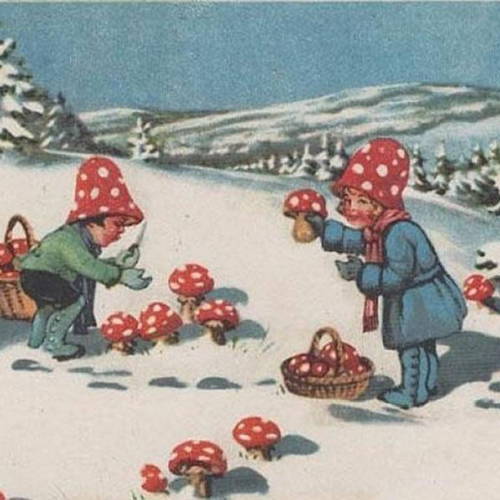 Santa is real -- and he was once a mushroom! Folklorists theorize that some of the Jolly Old Elf’s origins come from Nordic Shamanic practices. Early Arctic shamans celebrated the winter solstice by dressing in red and white, and giving the mushroom Amanita muscaria as gifts. You will probably recognize this mushroom (commonly called Fly Agaric), as the classic red and white spotted toadstool. In these early rites, shamans would drop these gifts down the open top of their neighbor’s teepee. Chimney story starting to sound familiar? Amanita muscaria commonly grows at the base of conifer trees like pine, spruce, and fir. Gifts under the tree? These Nordic communities based their livelihoods off of their domestication of reindeer, and given Amanita muscaria’s potential intoxicating effects, the eight flying reindeer start to make sense… 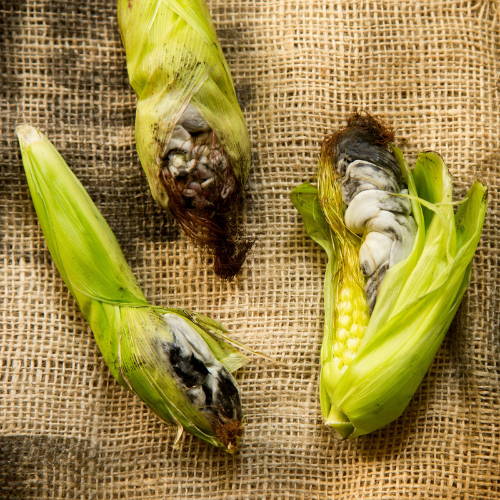 The name huitlacoche (pronounced wheet-la-KO-chee) comes from Nahuatl, which is the language of the Aztecs. This Central and South American fungus infects ears of corn, and turns the normally pearly round kernels into huge, hideous, bloated deformities. Sometimes it’s called “Corn Smut,” and it may be the ugliest thing you ever eat -- similar to dead zombie fingers growing on a corn cob. However, it is also sometimes called a “Mexican truffle,” because it is rich and absolutely delicious. It is smoky and earthy, with flavors of both mushroom umami and sweet corn. Huitlacoche is high in protein and, unlike regular corn, it contains high levels of lysine (an amino acid which builds muscle, strengthens bones, fights infections, and keeps skin looking young). 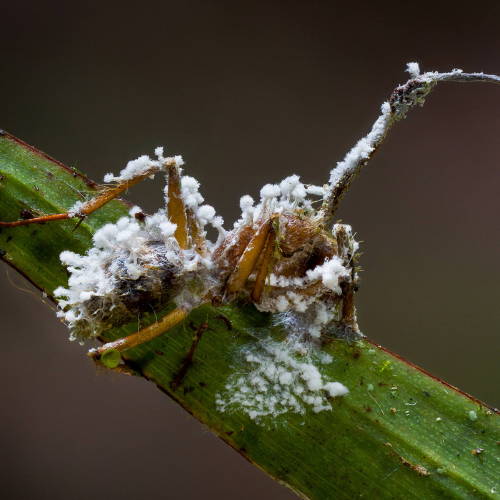 Imagine a fungal infection that takes over your brain. First it shuts down all of your self-preservation instincts, so you no longer avoid danger. Then it gives you an imperative to go toward bright lights. Without self agency, you wander stupidly toward your doom, and when you quickly and inevitably die, your body erupts into elaborate, sculptural deformities. No, this is not the plot of a new horror movie -- it is reality for insects so unfortunate as to become infected by Ophiocordyceps unilateralis, a Cordyceps mushroom, (not to be confused with cordyceps militaris, the well-known medicinal mushroom). Around the world, there are many species of these insidious endoparasitoids. They reproduce by overriding an insect’s brain, and encouraging it to climb upward toward the brighter parts of the forest’s canopy, where it is more likely to be preyed upon by birds, and the mushroom’s spores widely distributed after a trip through the bird’s digestive system. Failing that, when the insect dies from the fungal attack, the mycelium invades and replaces the host tissue, giving rise to elongated, branched, and complex fruiting mushroom bodies which then expel their spores to be carried on the breezes of the upper canopy. Have you ever felt more fortunate not to be a bug?