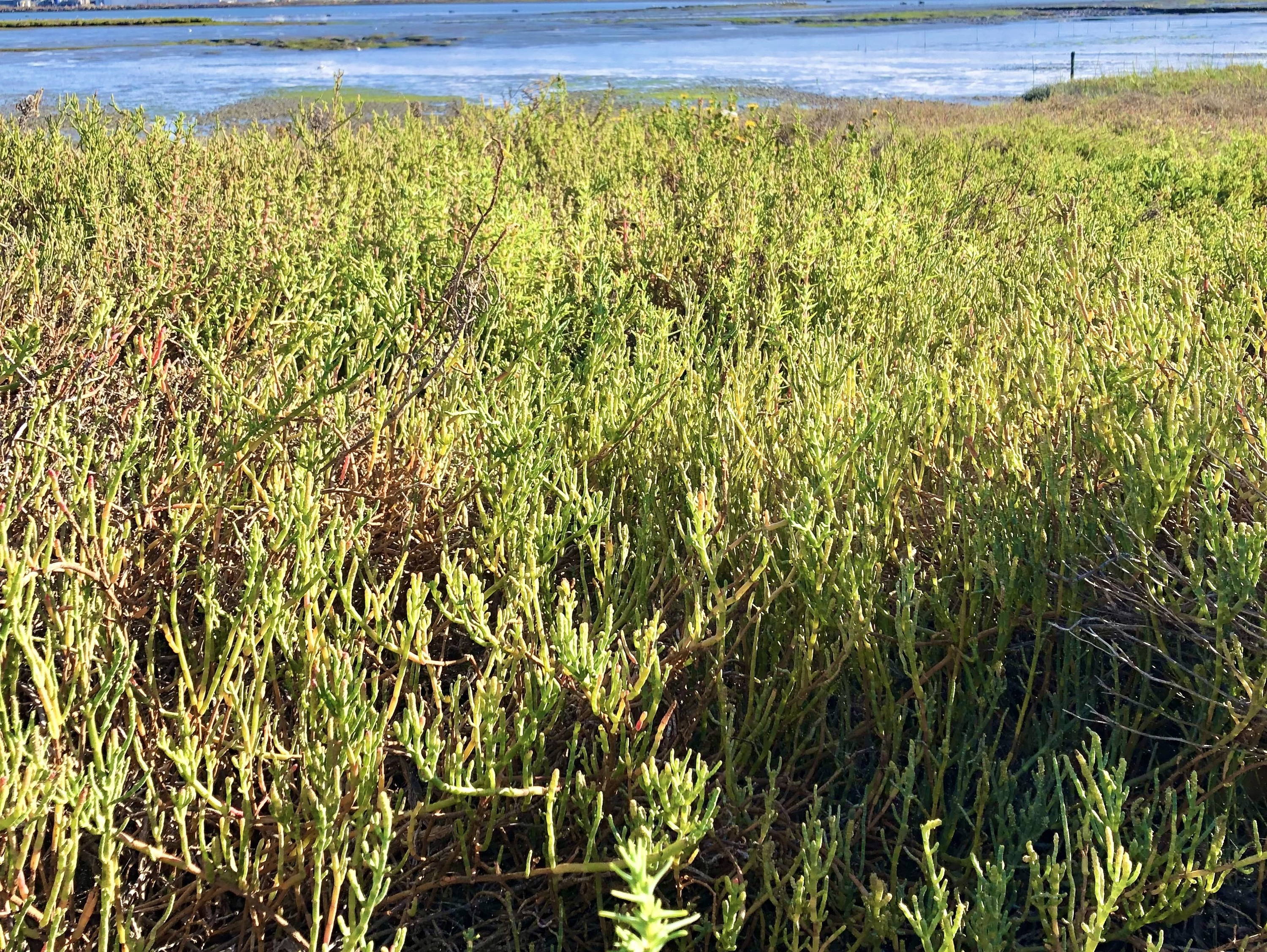 Sea Beans are one of the world’s most awesome and unusual vegetables. They have many names: Pickleweed, Sea Asparagus, Samphire, and Glasswort, to name a few. (Though they bear no resemblance to beans or asparagus!) Their scientific name is Salicornia, which aptly means “Salt horn.” They are halophytes, which means that they only grow in areas of high salinity. Because of this, their tissues absorb sodium, giving them a briny, intensely salty crunch. They are native to shorelines in temperate coastal climates all around the globe. These bright little succulents can be found in intertidal zones, estuaries, marshes, and muddy salt flats.

Salicornia puts on new growth in springtime, triggered by coastal floods and spring rain, and this is usually the best time to forage for them, because they are at their most tender. As the summer progresses, the older growth becomes tougher, saltier, and more fibrous. And as the weather starts cooling toward autumn, they turn slowly red at their joints. This is a sign that the season is coming to an end.

These days, Salicornia is most appreciated for its many culinary uses, but an interesting fact: in the 16th century, it was a vital component in soap and glass making (hence the name Glasswort). It was gathered in the marshes of Southern Europe, and burned to convert its salt content into an ash that was rich in sodium carbonate. This ash was then mixed with water, and filtered to remove impurities. The water was then evaporated, leaving behind “soda” or powdered sodium carbonate, which is essential for making both glass and detergents.

So what do you do with Sea Beans if you’re not a 16th century soap maker? If you’re a pickle fan, you’ll enjoy snacking on them raw by the handful. They’re excellent on a charcuterie plate, like gherkins, as a salty compliment to fatty cheeses or rich cured meats. Their most intuitive pairing is with seafood, as their wild ocean flavor elevates just about anything that came from the water, and brings notions of the seaside to your palate. They can be blanched to tame some of their saltiness, if preferred. Use them as a bed for scallops or a fillet, or chop them finely and mix them into a tuna salad. They’re a cunning addition to ceviche and poke. A personal favorite: blend them into a chimichurri with fresh herbs, white wine vinegar, and shallot, then spoon over oysters.

Sea Beans are surprisingly high in protein, with roughly 20 grams per 1 cup portion. They are also a good source of iron, vitamin A, and calcium. A great choice for vegetarians and vegans who are looking for natural sources of protein and trace minerals.

One last tip: try dehydrating them and grinding them into powder for a surprisingly pretty green salt – it makes an excellent rub for seasoning fish!