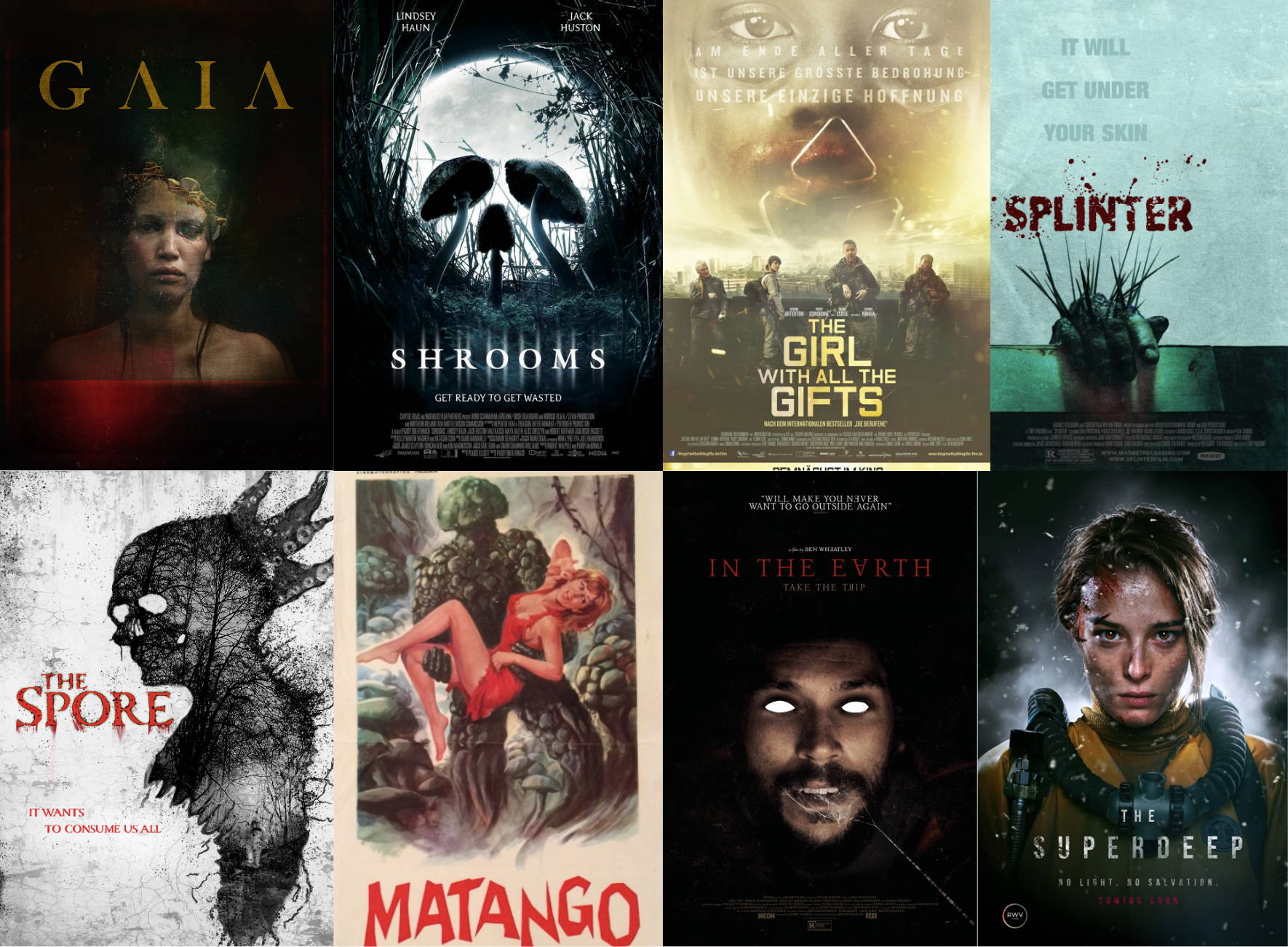 In this South African eco-horror film, two members of the South African forestry service enter the jungle in search of a lost drone. As darkness falls, they are terrorized by a mysterious creature, and a fast-growing fungus. Praised for its visuals and special effects, critics describe it as "a thought-provoking and disturbing experience." And "there’s some uniquely discomforting body horror, as characters scratch at wounds that have sprouted stems, caps, and gills."

For fans of slasher flicks, this campy romp follows a group of college friends who venture into the Irish countryside, intending to forage for psychedelic mushrooms. What should have been a spiritual experience quickly becomes a terrifying fight for their lives when they are stalked by a serial killer in the woods while in altered mental states. This is a good one to put on at a Halloween party.

This one achieved a good deal of mainstream attention. The story follows a rag tag group of survivors in a dystopian future in which a deadly fungal infection has turned most of humanity into fast, mindless zombies called “the hungries.” A scientist, a teacher, and two soldiers embark on a journey to protect a special child.

A fast-paced gory thriller that will appeal to fans of 90s horror movies. A young couple on a romantic road trip must shelter in an abandoned gas station and fight off an onslaught of ravenous corpses that have been reanimated by a parasitic fungus. A good movie for popcorn and beer – entertaining and doesn’t take itself too seriously.

When global warming releases ancient fungal spores from dormancy under an icecap, it triggers the apocalypse. In this pseudo-anthology film, the lives of ten strangers intersect in a coincidental chain of events as the mutating fungus spreads through their small town. With excellent effects, and many nods to classic horror directors, this will please other fans of genre horror.

This is a bad one! But we love it for its cheesiness. A Japanese movie in which a group of castaways on an island are unwittingly altered by a mutagenic fungus. Directed by Ishiro Honda, who is best known for directing the original Godzilla movie, this film was almost banned upon its release, because of its depiction of characters that resembled victims of the Hiroshima and Nagasaki atomic bombings.

Set in the midst of a global pandemic that might feel a bit too familiar to some, a pair of researchers embark on a field study to document the use of mycorrhiza to increase crop efficiency. Things take a dark turn, as they encounter an ancient presence in the woods, and stumble into a ritualistic folk-horror nightmare. Trapped by fungal spores, and plagued by psychedelic visions, the pair must fight to avoid being consumed by the woods.

A Russian movie set in 1984, and based on the real life Kola Superdeep Borehole. An epidemiologist is tasked with collecting samples from a deep underground research lab in which 20 people have mysteriously gone missing. The research team discovers the presence of an infectious mold that needs the warm body of a host to survive in the cold conditions of the borehole.