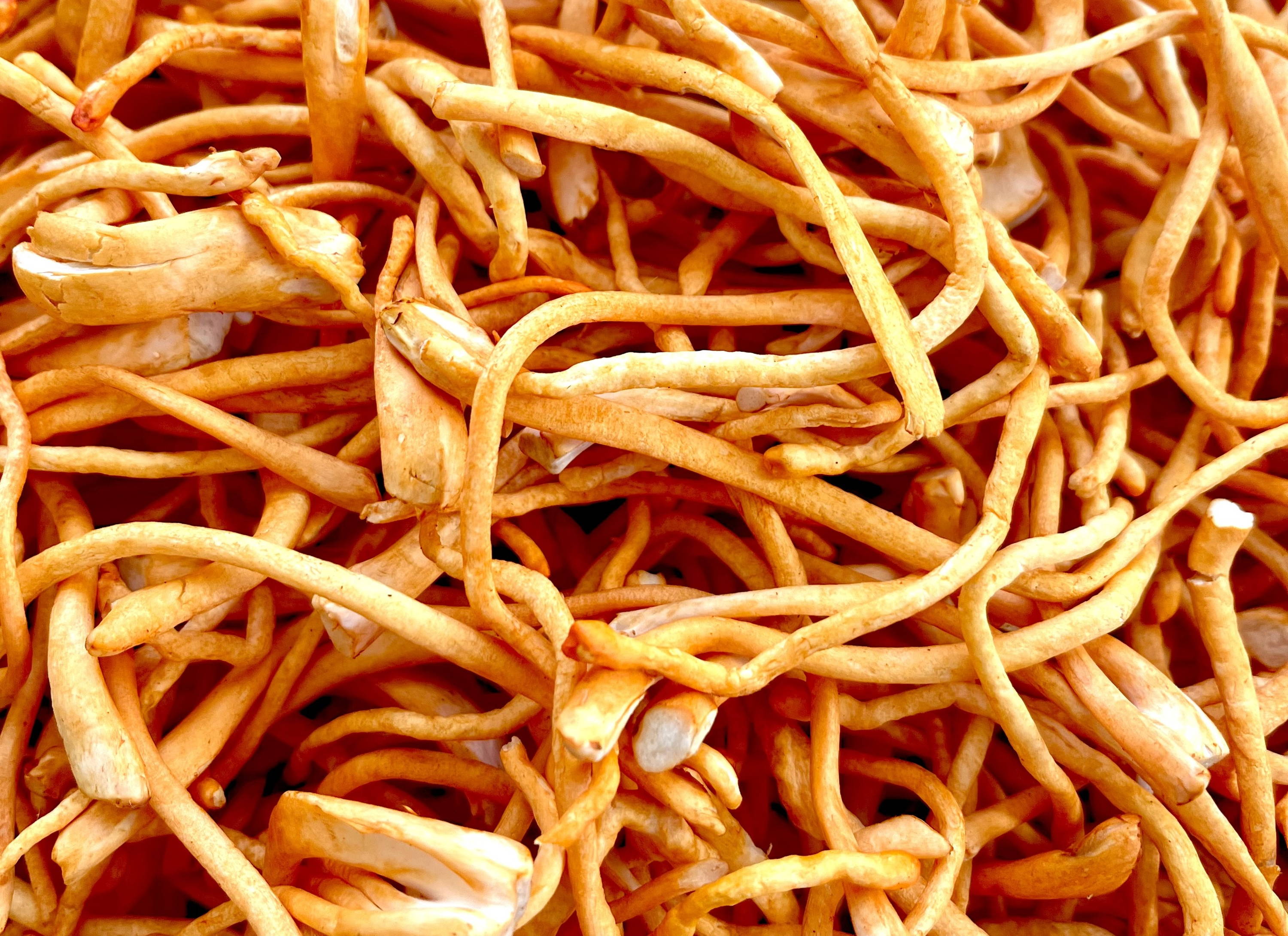 Cordyceps are a mushroom with considerable notoriety. Most people know them as the “zombie fungus,” and the association is often accompanied by squeamishness. And to be fair, anyone with a sensitivity to body-horror would naturally recoil from the truly gruesome function of this endoparasitoid. There are many different species of Cordyceps in the wild, and they all have the same thing in common: they invade the bodies of insects with their mycelium, first taking over their brains and overriding their natural survival instincts, guiding them to travel mindlessly upwards to the highest point, from which the mushroom can then release its spores. Once in place, the mycelium fuses the insect to its base by colonizing its entire body, and then releases the horrifyingly long tendrils of its fruiting bodies. If this sounds like the plot of a horror movie, you’re right. This visceral and invasive fungal attack has captured the imaginations of many horror franchises, and it is even the basis of the popular video game, The Last of Us.

It might come as a surprise to you that in addition to being the most horrifying thing you’ve ever heard of, Cordyceps are also highly valued for human consumption, and are a widely sought commodity in both the culinary world, and the world of herbal medicine. There are two distinct species of Cordyceps that are beneficial to humans. The first, Ophiocordyceps sinensis, is only found in the wild on the meadows of the Tibetan Plateau in Southwest China and the Himalayan regions of Bhutan and Nepal. 95% of O. sinensis is found in Tibet. Because of its scarcity, and its vital cultural importance, its value per pound is literally higher than gold. You are unlikely to encounter true Ophiocordyceps sinensis for sale in the United States. Another species with activity and benefits nearly identical to wild cordyceps, Cordyceps militaris, is most commonly cultivated in the US. You may be relieved to learn that in lieu of insects, C. militaris is grown on rice or barley. No bugs involved! Fresh Cordyceps have a very distinctive appearance – they are stringy and bright orange, and look more like shredded cheese than mushrooms.

In traditional Chinese medicine, Cordyceps is thought to benefit the bronchial system, and is often prescribed for people with asthma or weak lungs. It helps the lungs absorb more oxygen when we breathe, which is one reason they have been so important to Tibetan people living at extremely high elevations. Many athletes take cordyceps supplements to increase their stamina and endurance. In fact, during the 1993 Beijing Olympics, the Chinese women’s running team came under considerable suspicion, when they broke multiple world records with their performances. When tested for steroids, it came to light that their coach had been giving them Cordyceps supplements after their training sessions, which sparked debate about where the line is drawn for using natural remedies for performance enhancement.

If you want to use Cordyceps for their beneficial qualities, they are best administered as a tea, or a tincture. Dried Cordyceps can be boiled (as with all dried mushrooms, the longer the better), and then drunk hot or cold. The fresh mushrooms are delicious in a culinary capacity, with a rich, toasty flavor that it is sweet and almost coconut-like. They cook quickly in the pan, and retain their bright orange color. They are excellent for stir fries, and make an excellent addition to ramen. Because of their noodly texture, they are good tossed with pasta. A recent trend in coffee shops lately is the Cordycep latte – a frothy golden alternative to coffee, brewed with cordyceps powder. However you use them, one thing is certain: they are much better for you than they are for bugs!