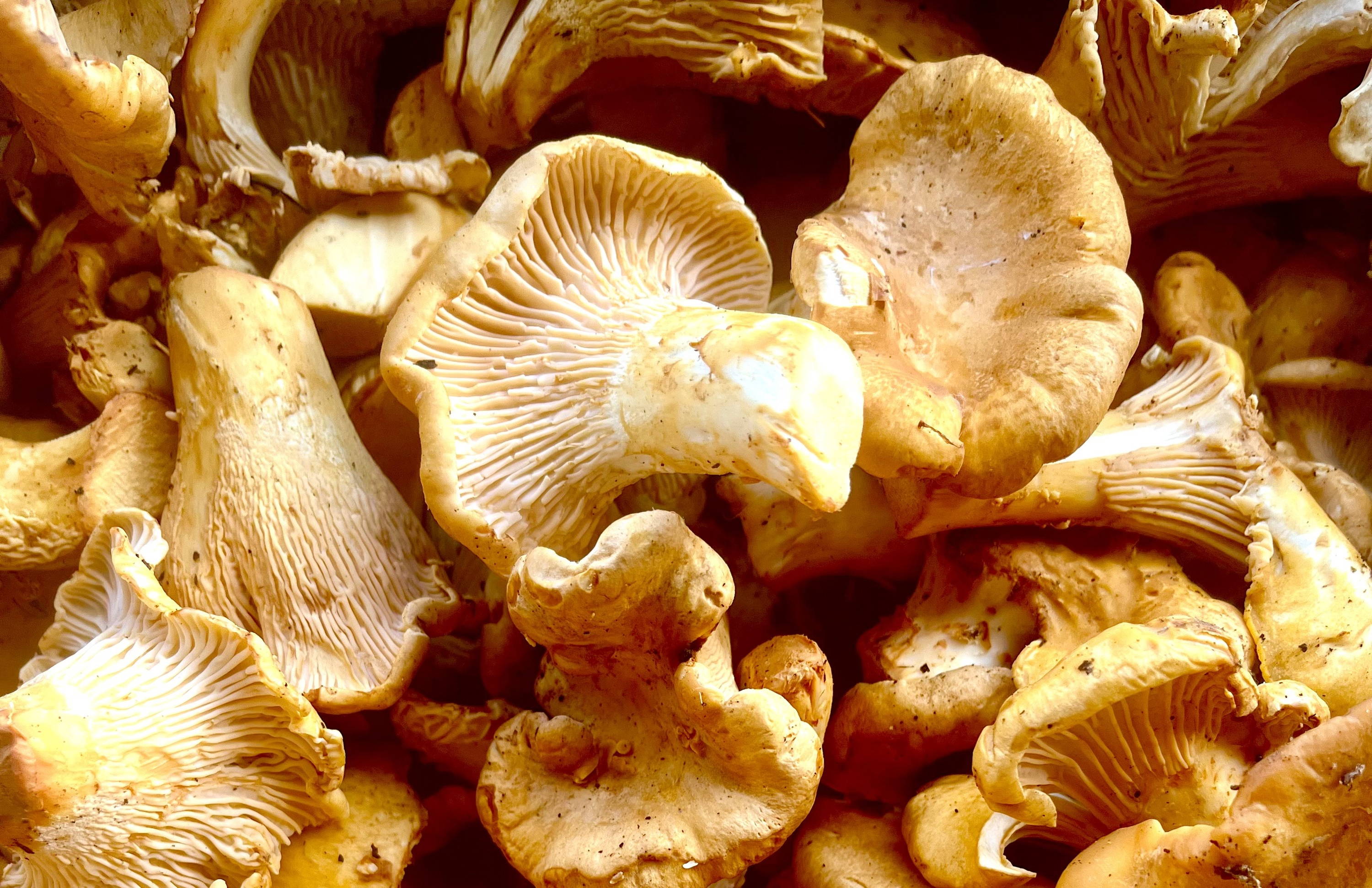 Golden chanterelles are like the yellow Labradors of the mushroom world: friendly, yellow, occasionally messy, and impossible not to like. Their flavor is fruity and peppery, with distinctive notes of apricot, and they are one of the most abundant and easy to find of all wild mushrooms. Their bright golden caps practically glow out of the dark understory of the forest, making them easy to spot from a distance. Though many different variants of Chanterelle grow all over the US and Europe, our native California species, Cantherellus californicus is the largest variety in the world. Affectionately nicknamed “Mud Puppies,” Californicus can grow caps almost a foot wide.

Chanterelles love to grow around oak trees, so our abundance of tan and live oak in Northern California supplies them with an ideal habitat. Though their favorite seasons are fall and winter, Chanterelles can be found year round if the conditions are right. One of our favorite varieties comes from Louisiana, and only shows up for a few weeks in mid to late July. Unlike the meaty giants from California, Louisiana Chanterelles are delicate, thin-fleshed, and almost look more like flowers than mushrooms. Chanterelles come in a few other colors besides gold, though the gold ones are the most ubiquitous. White Chanterelles look so similar that they could be mistaken for pale gold by an untrained eye. We find them to be even more fragrant and fruit-forward than their golden counterparts, though often more wet. Violet Chanterelles (sometimes referred to less appealingly as “pig’s ears”), are woodsy and savory, with less fruitiness. It’s a rare find, but we occasionally come across Blue Chanterelles, which taste gamey, somewhat like lamb. The word “blue” may be a misnomer, as they are nearly black, with a frosting of powder blue spores between the gills.

Though easy to identify once you know what to look for, there are a few Chanterelle look-alikes to avoid. The most important factor to consider when identifying Chanterelles are the gills – or lack thereof. False Chanterelles (Hygrophoropsis aurantiaca) look alarmingly similar to true Chanterelles, except that they have clearly defined gills. A true Chanterelle has folds, rather than gills. They are rounded and vein-like, forking randomly like streams of water, and they run in a smooth curve down from the cap into the stem, terminating gradually until they get so small they disappear. If you find a mushroom that looks like a Chanterelle, but its gills terminate abruptly all in the same place, it is not a Chanterelle! One of the most poisonous lookalikes, the Jack O’Lantern, also has true gills, and is often found growing on decaying stumps and logs. Chanterelles are mycorrhizal, which means that you will find them growing right up out of the ground, never on a stump. One thing that makes golden Chanterelles stand out among most other wild mushrooms, is that they almost never attract insects. If you hate cutting into a Porcini and finding it full of worms, fear not with the Chanterelle! Something in their compounds makes them insect resistant.

Chanterelle consumption dates back to the Middle Ages, but its first widespread popularity came with the increasing influence of French cuisine in the 18th century. It is perhaps the most beloved wild mushroom in Europe, next to the Porcini, and is indispensable to the culinary traditions of Germany, Sweden, France, and everywhere else from Scandinavia to the Mediterranean. Their delicate, complex flavors are both fat and alcohol soluble, so they do well in dishes cooked with butter, cream, and wine. Because raw Chanterelles are 90% water (in fact, prone to be one of the most waterlogged of all wild mushrooms), we do not recommend washing them. The best way to concentrate their flavor and avoid slimy texture, is to toast them slowly in a dry pan. Be patient, and allow their released water to evaporate and cook off. You are literally dehydrating them in the pan. When you are ready, introduce butter and white wine to deglaze, and allow these flavorful elements to soak in and rehydrate the mushrooms.