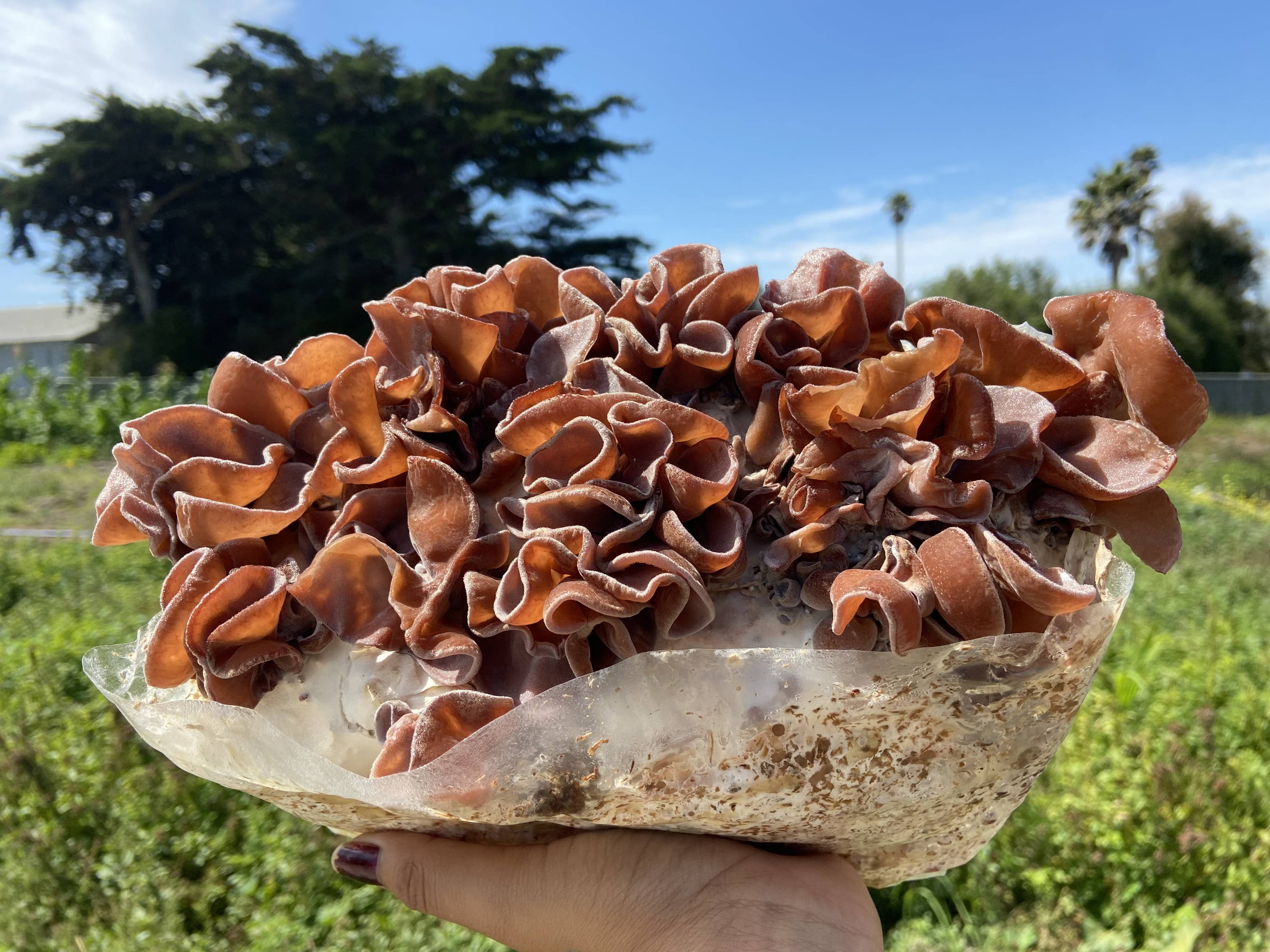 The hills may not have eyes, but sometimes the trees really do have ears. There are a lot of silly and creative names in the mushroom kingdom, but Woodear mushrooms might have the most literal of them all. These brown, fleshy jelly fungi grow like little cups on trunks, stumps, and branches, and oftentimes look exactly like human ears. Weird! Their most common association is with elder trees, but can occur on most types of deciduous hardwood across the US, Europe, and East Asia.

Though not uncommon in the woods, wild Woodear is seldom found in commercial markets. It is easy to cultivate, and most of the time, the ones found on the market are farmed. Because this mushroom grows most prolifically in summer months, it is accustomed to drying out in the heat, and then rehydrating repeatedly when it rains. This is fortunate for us, because it means that when properly soaked, dried Woodear returns almost exactly to its fresh state. That’s why the majority of farmed Woodear goes straight into the dehydrator. Once removed of all its water, it will remain shelf-stable almost indefinitely.

Dried Woodear is an Asian pantry staple. They’re called for in many Szechuan and Hunan dishes, and are traditional in ramen. Most people who have had Hot & Sour soup in a Chinese restaurant have tried Woodear before, though it might not have been recognizable as a mushroom. They are traditionally cut into thin strips, and tucked into soups, stir fries, and spring rolls. They have a distinctly chewy, crunchy texture, almost like cartilage (again with the ears!) and a mild flavor. When left in whole pieces, their many folds are great for holding onto sauces.

Rehydrating Woodear couldn’t be simpler. Just like soaking Kombu or Wakame, submerge the mushrooms in lukewarm water for about half an hour. You’ll know when they’re ready to use when they’re plump and pliant, and look like you could have just picked them off a tree. Because of their mild flavor, you can really get creative with them in the kitchen. For example, we have recently been experimenting with chocolate-covered Woodear in our test kitchen. It acts like a gummy candied center – unusual, but amazing. If you find particularly large palm-sized pieces, they can be used in place of rice paper wrappings for making fresh rolls or steamed dumplings. Once you start playing around with them, you’ll find all kinds of weird and wonderful uses for them.

Culinary appeal aside, Woodear is considered a medicine in Asia, Africa, New Zealand, Europe, and Mexico. As with most mushrooms, they have proven benefits to the immune system. They are also renowned for improving circulation, and in Chinese medicine they are said to “build the blood” – essentially oxygenating, increasing white blood cell count, and boosting vitality and vigor. They have a very high fiber content, and can help ease gastric inflammation and ulcers, and support digestion. Many laboratory research studies have suggested its usefulness for cancer prevention and support, antiviral and antibacterial activity, cholesterol and blood sugar regulation, and as a prebiotic support for the formation of beneficial bacterial colonies in the body. They are considered an anti-aging folk remedy, and are sometimes applied as a poultice to reduce the appearance of liver spots.