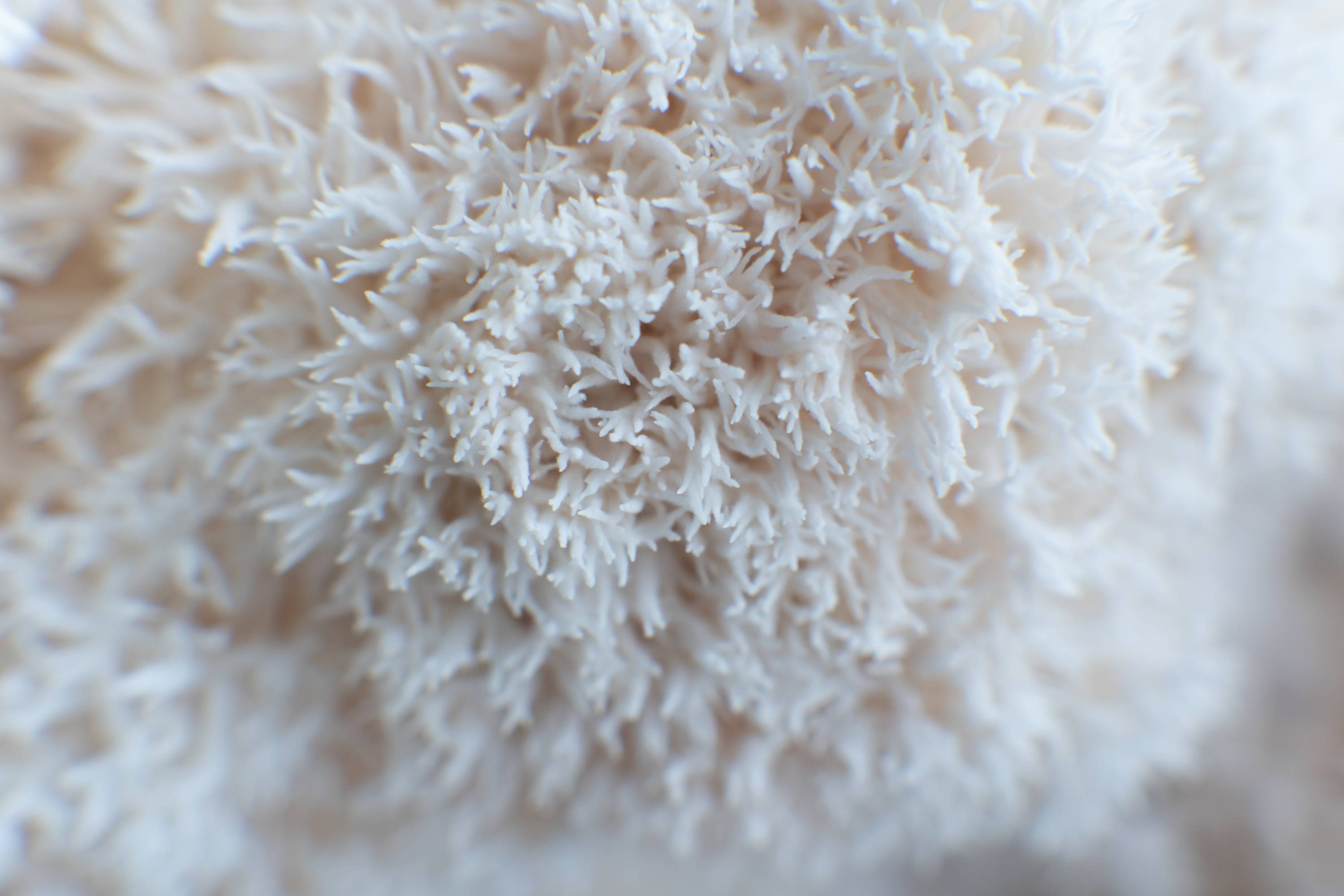 It’s fuzzy, it’s cute, it’s delicious and it’s hot hot hot right now. Unless you’ve been living under a rock for the past couple years, chances are you’ve heard the word “Lion’s Mane” floating through conversation quite a bit. Due to the release of a popular mainstream documentary (Fantastic Fungi on Netflix), and its subsequent popularity as the subject of podcasts and social media posts, Lion’s Mane mushrooms have been prominent in public consciousness lately. Most of the interest centers around the fact that Lion’s Mane (Hericium erinaceus) is specifically powerful for boosting the brain. It is a hot subject of pharmaceutical research, and is currently in many clinical trials for its potential to prevent and combat Alzheimer’s and dementia, re-grow neural networks, boost memory and cognition, and support nerve repair.

The components in Lion’s Mane that benefit the brain are called Diterpenes, which are a class of naturally occurring chemicals which form the basis for many biologically important compounds, such as retinol, retinal, and phytol. One Diterpene, Erinacine A, exists only in Lion’s Mane mushroom and nowhere else. Erinacine A supports neural growth, and serves as a neurotransmitter, aiding in the exchange of brain chemicals amongst neurons and across synapses. In simpler terms, Lion’s Mane helps boost the radio signals between the nerve endings in your brain, which strengthens your brain’s ability to communicate with the rest of your body. It also helps form the building blocks of important compounds created by the body, such as ones that enable us to repair nerves and networks, preventing mental decline.

Now that we understand the science that makes this mushroom cool, let’s look at all the other stuff. Lion’s Mane is very easy to cultivate, and can be found in the wild throughout North America and Europe, though it is considered a protected species. It is saprophytic, which means that it grows on trees and stumps – one thing that makes it so easy to cultivate. Look up at the crooks in hardwood trees, particularly beech and maple, during wet seasons when the trees have lost their leaves. The mushrooms themselves look like white furry creatures, or cauliflower. Their bodies are composed of tightly packed spines, which hold their spores. When the mushrooms are young, the spines are short, like fuzz, and as they age, the spines grow long and toothy, like a mop of long hair. A fresh Lion’s Mane is creamy white in color, but if they are allowed to dry out, they take on a yellowy oxidation, which is not harmful, but is an indication that it’s been a while since it was picked.

The most common observation about Lion’s Mane is that it tastes like crab. It has a mildly sweet flavor, and a spongy, flaky texture. It is very absorbent, so it does well in stir fries and saucy dishes, where it can soak up a lot of juices and act as a vehicle for flavors. Shredded and sauteed, it is an excellent meat substitute, especially to make faux chicken salad. We serve it in our Santa Cruz café on a lobster-free lobster roll. To reap all the brain benefits, you can also consume Lion’s Mane in a tincture, or brew a tea out of the dried or powdered mushrooms. Lion’s mane powder can be encapsulated, and taken as a daily supplement. It can also be combined with other medicinal mushrooms, such as Reishi, Chaga, and Turkeytail, to make an ultimate mushroom superpower tea.